Editor Andrew Roden reveals this month’s selection of relics and surprises. If you have anything you’d like us to add, contact us at swweb@choicemag.co.uk

Can anyone help John identify this ‘mystery’ ECML location?

It’s been a while since we covered any locations unidentifiable to photo archives, but when John Chalcraft of Rail Photoprints got in touch, we couldn’t resist.
“To the uninitiated,” he writes: setting up an archive website for railway photographs would seem like a relatively easy task, and it probably is if you limit the site to just you own material And you have been meticulous with you note making and film storage over the years
“Sadly, my (lack of) adequate record keeping over the years has given me a huge workload as I trawl through both negatives and transparencies before converting the images to digital format, and, while in the majority of my instances I can identify the location, locomotive number and year I find that other vital information such as the train working can only be obtained from reference to the Working Timetables that have been amassed over the years. Fortunately, the advent of the internet has resulted in the setting up of several; superb data record sites which do make a lot of information retrieval easier but, their use still takes time.
“In addition to my own work, I have amassed thousands of images from other sources, both direct from photographers and at auctions, and the real image identification problems are with them. Many of the auctioned negatives contain little or no information, and in some instances the information is incorrect. Our processes files provide as much information as possible, but in certain cases- ignorance of location, working, date etc makes identification impossible, a selection of unidentified images appear in thee pages in the hope that you can help the identification process.
“First up is ‘A4’ 4-6-2 No. 60034 Peregrine but where is it? I suspect it could be leaving Grantham (there is a line coming in from the right at the rear of the train- possibly the Nottingham line). A small town is visible to the left beyond the embankment. 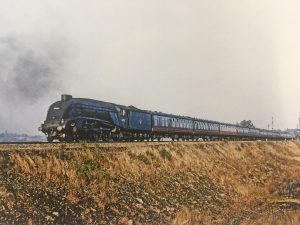 “The second is at the same location as No. 60034 but the question is the same-where is it? Any help from readers will be gratefully appreciated.”

Prompted by surviving railway artefacts covered recently, John Sambrook of Cwmrheidol dropped us a line to highlight a couple of Cambrian Railways relics at Newtown (Powys).
He says he found the metal air vents three or four years ago when travelling regularly to Aberystwyth: “One night when the train was running very late, being bored, I was mooching around the station, and discovered something of interest in the down waiting shelter. In the rear wall I found several metal air vents, shared to spell out Cambrian Ry. Some are better preserved than others.”
What wonderful survivors! If you see any on your travels, please do drop us a line
If you can have a picture to share, contact us at swweb@choicemag.co.uk or on Facebook or Twitter

Remember the days when retirement was marked by more than a simple”farewell”? Well, Mrs Fran Newport of Bitton, Bristol, certainly does, and prompted by her husband about Mike Price’s article in SW 370 of his career at Bristol Barrow Road, she wrote in with this touching story:
“I think the roster clerk Mike mentioned must have been my dad, Percy Hill. Percy fought in the Tank Corps in the First World War and joined the Midland Railway at Barrow Road in February 1919 as a ‘cleaning labourer’ (to quote his record card). He was promoted to boiler washer at the end of 1920. He had hoped to join the footplate grades but turned out to be colour blind! He was made up to Foreman’s Assisstant in 1942 and was then largely responsoble for rosters until his retirement in 1959. The tales he told me about how to get enginemen to cover the unpopular turns never ceased to amuse me!
“The attached photograph shows Percy proudly receiving a commemorative clock from his manager on his retirement. Interestingly the clock, which is still clicking behind me as I write, carries a plaque showing that it was a gift from an official acknowledgement of his service (though we have a letter from BR as well).
“I hope Mike’s memories of Dad are all good ones, and, if he were able to get in touch to tell me more about those times, I’d be pleased to hear from him.”
It’s a wonderful tale, and if Mike wants to get in touch with us, we’ll forward his details to Fran. What other retirement gifts were people given from the railway, we wonder? Do let is know if you received something particularly special.

The ‘Duke’ was Brian’s best ‘pacific’

There’s been a fair correspondence about what Britain’s ultimate ‘Pacific’ steam locomotive was, but Brian Davis thinks he has the definitive answer.
“I would firmly stick up for ‘8P’ No. 71000 Duke of Gloucester,” he writes, explaining of its preservation career: “i had a ride behind No.71000 a few years ago, from London to Exeter and as we were approaching Honiton bank, i waited to hear a lot of heavy barking from the exhaust and a slowing of our speed, but it did not occur. WE flew up over the bank at an announced record speed of 49mph. I and others were very impressed.
“I would suggest that you look at the ‘Duke’ on video sharing website ‘YouTube’ to see what a cracking locomotive it is. There is one video from a carriage about halfway down the train as it ascended Shap. I think I am right in saying that there is a stretch of about four miles at 1 in 75 and the train went up it with a dozen or so carriages at 60mph! I doubt if any other steam locomotive could match that.”
But he also suggests a tantalising possibility of modifying a ‘Merchant navy’ too: “Apparently, i n 1941, Oliver Bulleid wanted to put Caprotti valve gear on his ‘Merchant Navy’ class, but the powers that be refused because we were fighting the inventors, so he designed his own valve gear instead. It was said that there was a plan to put the Caprotti gear on the last ‘Battle of Britain’, No. 34110 66 Squadron, but it never came about. I wonder id any ‘Packet’ owners out there would be interested in putting Caprotti gear on one of their locomotives? The Bulleid ‘Pacifics’ were known to be a bit heavy on coal but they were and are excellent steamers, so I wonder what would happen if you put Caprotti on a ‘Merchant Navy’? If I had the money, I would pay for it myself, but unfortunately, I don’. Perhaps the General Steam Navigation group might like to do that and put the casing back on it as planned- oh yes, and paint it blue!”
We can all sympathise with Brian’s money-no-object dreaming there… if I had the money I’d look to build a new great bear and see- as per N. 71000- whether its steaming problems could be sorted. Which may just give rise to another topic for debate: given unlimited money, what locomotives would you build or modify with it? Answers to the usual address…` or get in touch on Facebook or Twitter